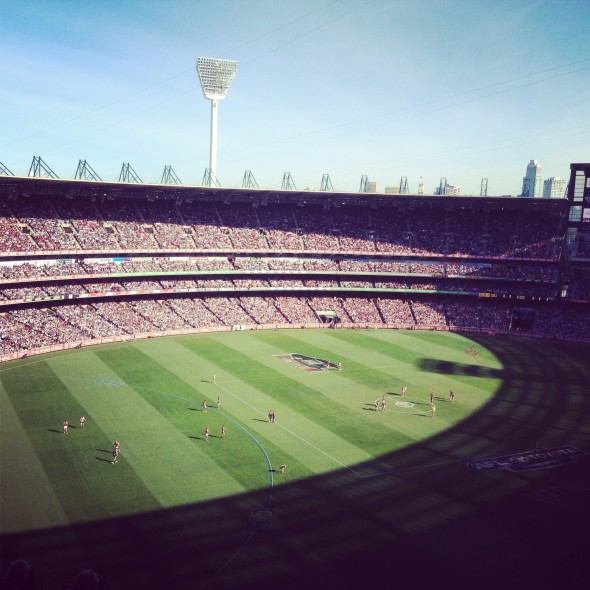 My favourite part about footy? The sounds. You don’t watch a game – you hear it.

You can stand with your back to the play and still know what’s happening.

The low hum that builds as a side makes a push into the forward half with momentum behind them.

The urgent cry that warns a player he’s about to be chased down, so he’d better get rid of it, and fast.

The aggressive groan and snapping of plastic chairs that tells you the umpire has made a bad call, which is always followed by indignant murmurs. “We’re getting robbed today” or “The umps are giving us a bath”.

There’s the sound that comes when the whole crowd gasps and forgets to breathe for a second before exhaling deeply.

Then there’s “ball”. Well, what’s meant to be “ball” but comes out as “baaaaawwwww” which is sometimes followed, in the same breath, by a “yeaahhhhh”.

I’m convinced we’re the only sport where the fans audibly tell the umpire the decision we want them to make.

Even in cricket, it’s the players who appeal, not the crowd. When it comes to cricket, we follow them, always a split second behind, reacting.

The game ebbs and flows based on sound.

There’s always something happening, so there’s no need, and no time, for the taunts and chants that soccer provides.

It’s not like basketball, where we need the scoreboard to tell us when to chant “d-fence”.

It’s definitely not like tennis; there’s no silence in between points, followed by either polite or raucous applause.

It’s the only sport in the world where each team has a song the players themselves sing after each match.

A song that’s more than likely the first piece of music a young Melburnian will learn off by heart.

(I learnt to spell Melbourne by the time I was four purely based on the cheer squad’s chant.)

(Sometimes it still jumps into my head when I write it.)

There’s the roar that engulfs a three kilometre radius and drowns out the final line of the National Anthem on Grand Final day – it’s like a feather down my spine every single time.

Granted, it’s not unique to our sport, but we try our best to make it our own.

And the best part? If you close your eyes and listen hard enough, you can even hear the sound of the football itself. The soft thud as it strikes the foot, the fizz of the laces as they break and snap through the air.

Footy is back, and we’re all glad to hear it.