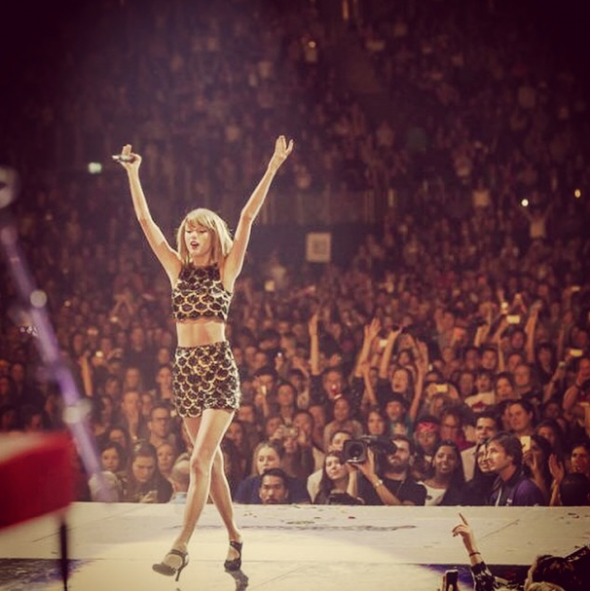 New York magazine’s excellent cover story on Taylor Swift has again brought the boring “Taylor Swift is anti-feminist” debate back to the internet, because of course it has. Excuse me while I go bang my head on my desk for a few hours.

To be fair to the publication, the Swift feminism debate has been a huge talking point for a long time – the writer had to bring it up, and manages to do so deftly.

But the frustrating aspect is that the story even exists at all. Google Taylor Swift feminist and see for yourself.

Swift is, as the feature argues, the biggest pop star in the world right now. Which means that naturally, writers, critics, and publications are going to keep finding ways to talk about her.

The 24 hour news cycle has a lot to answer for. Can’t we just enjoy Swift’s saccharine sweet pop sound for what it is?

For years we’ve seen articles criticizing Swift for writing solely about relationships – with some going as far as to label her a “feminists nightmare”.

But really, what does it even mean to be a feminist anymore? There’s no overarching litmus test; the word means a lot of different things to different people. Reduced to its simplest form, you could argue that feminism comes down to believing that women should be given equal rights to those of men. (Still confused? Take a look at this.)

But, that’s another debate for another day.

Swift has been made an unfair whipping girl and an easy target. She can’t win, no matter what she says on the topic. Put aside your thoughts on her responses to being asked if she’s a feminist, and think about how much it sucks that she’s even being asked that incredibly loaded question at all.

Beyonce called her tour “Mrs Carter” and (some would say fairly) tells other women to “bow down bitches” to almost zero outrage – most likely due to the fact Queen Bey has been singing about attaining financial independence for a decade. Maybe T-Swizzle just needs to write a song about all her dollar dollar bills?

Swift might sing about boys and heartbreak and fairytales, but by shaming her jerky ex-boyfriends and bullies, she’s dealing in a different kind of empowerment.

The underlying implication in her lyrics is just as positive as the one running through Beyonce songs – don’t settle for anything less than you deserve. Don’t let anyone treat you badly.

With each new record, Swift’s narration has moved further and further from that of unpopular high school outcast, while retaining her existing fans and gaining new ones along the way. But, the ethos is the same: Don’t hurt me, or I will write a song about you, and embarrass you in front of the world. It’s her way of taking the power back from an otherwise emotionally difficult situation, and just quietly, it’s a pretty baller move.

For millions of teenage girls, Swift’s is delivering her own brand of “It Gets Better”.

In the same way that many girls are picking up a bow and quiver while a side braid, you can bet an equal number are picking up a guitar and a notebook. No one can convince me that’s a bad thing, no matter what side of the debate you sit on.

If there’s one shining light in all of this fuckery, and it comes in the form of the Feminist Taylor Swift twitter account.

(Sample tweet: “She wears short skirts / I wear t-shirts / Neither of us is asking for it”.)

If you don’t like Swift’s music, that’s totally fine. (Although, if you’ve got ears and a heart, you should.)

Just don’t crucify her for not behaving like a suffragette.