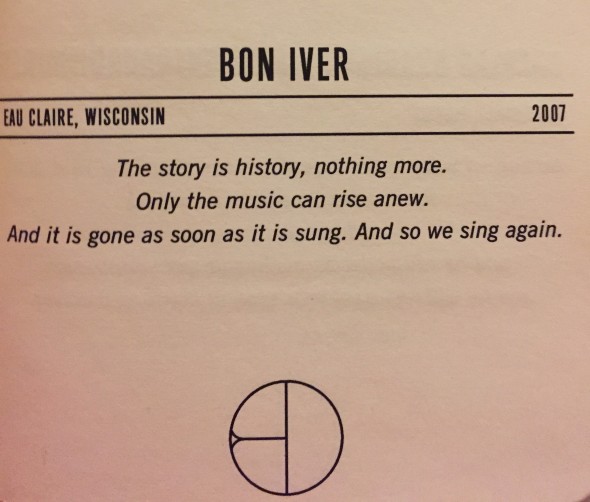 I was here. I sang then, and I’m singing now, again, again, and again.

Last week I told my friend and Eaux Claire’s companion Kristin that my favourite Bon Iver song is Lump Sum, and she was surprised to hear it’s not Skinny Love, or re:Stacks (her current jam.)

I’ve listened to For Emma, Forever Ago roughly three times a week since its release in 2008, and I know Lump Sum is an unconventional choice.

It doesn’t have the cathartic pleas of Skinny Love, or the melancholic reflection of Re: Stacks, or the story telling of Blood Bank, or the blooming intricacies of Holocene.

Skinny Love is a howl that crawls from your throat and bursts from your body. Lump Sum is a song that sticks in your blood stream.

It begins with church-like hymns, then bursts into an insistent heartbeat.

It’s driving, steady and urgent. It holds, carries you under its weight, doesn’t crack.

So the story goes.